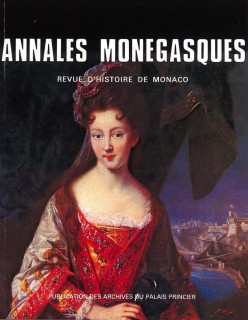 Louise-Hippolyte of Monaco was born in 1697, daughter of Prince Antoine I and Marie de Lorraine. In 1715, she married the earl of Torigni Jacques de Goyon-Matignon, while he took the name and the arms of the Grimaldis. Louis-Hippolyte assumed the throne after her father’s death on January 20th 1731, and became as a result, the first princess reigning in Monaco. She died a few months later, at the age of 34. (full text in French)

The Salle Garnier, the new Opera of Monte-Carlo, was inaugurated in 1879. Its activity increased over the next decade. This study highlights each lyrical season since 1889, and is the continuation of the article entitled " The origins of the lyric theater in Monte-Carlo. From gaming houses to the Salle Garnier (1855-1879) ", published in the 1st Annales monégasques in 1977, and written by the same author. (full text in French)

THE FORTIFICATIONS OF MONACO

Inspired by historians such as Gustave Saige, Léon-Honoré Labande and the canon Villeneuve, Claude Passet completes the information provided by those authors and studies the defensive developments of Monaco, between the 13th and the 19th century. Initially a small castle on a rock, the citadel became a real fortress in the 16th century, and was modernized under Antoine I. (full text in French)

A MAGE ON THE ROCK OF MONACO : ANTOINE GODEAU IN THE PRINCIPALITY TO VISIT HONORÉ II

Antoine Godeau (1605-1672), man of letters, bishop of Grasse and Vence, was a regular at the Madeleine de Scudéry’s salon and advisor to the King. Antoine Godeau was also a close neighbour of Prince Honoré II, with whom he corresponded. He even reminisced about his visits to the Prince’s Palace. (full text in French)

HOUSE OF GRIMALDI : THE ORIGINS AND HISTORICAL EVOLUTIONS OF THE INHERITANCE LAW

The article covers the inheritance matters within the Grimaldi, who, although influenced by the Genoa customs from the Middle Ages and the French capetian habits, worked out a law where women could reign, provided that their husband belonged " either to the race, or to the Albergue of Grimaldi ". The author also mentions Louise-Hippolyte, sole heir of Prince Antoine I. (full text in French)

This issue presents a biography of the only Sovereign Princess of Monaco, but also an interesting archeological study about the ramparts of the fortress of Monaco. The Principality’s musical history is covered, as well as the sovereignty foundations and the dynasty inheritance. This issue also talks about a famous visitor from the 17th century, and his view of Monaco. (full texts in French)