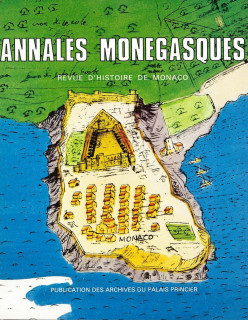 This study deals with the denfense and progress of the battle of Menton, which opposed French soldiers to Italians, in a higher number. The latter were ordered, by the “Duce” to occupy Menton for political reasons, while France signed the Armistice with Germany. (full text in French)

THE THREE TRIPS OF PRINCE ALBERT I TO THE UNITED-STATES

As an explorer, Prince Albert I travelled to America three times. In 1868, he went to the United-States and a part of Canada. In 1913, during his second trip, he met Buffalo Bill and went through the United-States until reaching Wyoming, to the West. In 1921, he travelled to New York and Washington, and received two medals from prestigious American institutions. (full text in French)

This is the last part of a trilogy dedicated to the youth of Honoré V (for the first two parts, please refer to Annales Monégasques n°4 – 1980 : “when the citizen Grimaldi served in the Republic’s armed forces (december 1798 – june 1801)” and Annales Monégasques n°6 – 1982 : “The Emperor’s officer. The German and Polish campaigns (1806-1807)”). Murat’s “aide-de-camp”, Honoré Grimaldi followed him in Spain in 1808, and became, in 1810, the first horse rider of Empress Josephine prior to becoming Empire Baron. (full text in French)

THE KING AND THE BANKER : MONTE-CARLO AND THE S.B.M. AT THE NICE CARNIVAL

Between 1876 and 1914, the “Société des Bains de Mer” partly subsidized the Nice Carnival, which had been developed thanks to the influence of the events committee since 1873. Then, some prizes were created in order to reward the best masquerades. (full text in French)

The events occurring on November 17th 1641, among which the eviction of the Spanish garrison, marked a turning point in the history of Monaco. The authors analyses and publishes a short witness that Don Dominique Pacchiero, the former priest of Saint-Nicholas, wrote in his “Giornale”. (full text in French)

HOW MANY MONEGASQUES IN THE MIDDLE AGES ?

The section " Document of the year " deals with a founding event : the Spanish garrison’s eviction from Monaco in 1641. This issue also refers to social topics, through an analysis of the Monegasque population in the Middle Age, and the participation of the S.B.M. to popular and carnival festivities in Nice, in the late 19th century. The contemporary history is also presented as René Diana covers the third part of his study about the military career of Honoré V, under the Empire. Hélène Day recounts Albert I’s trips to the United States. To finish with, an article deals with the battle of Menton against the Italians in 1940, relying on the available information about the Second World War. (full texts in French)