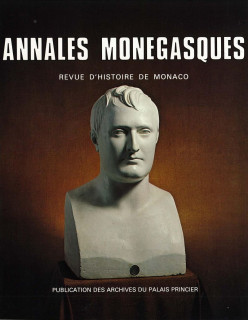 THE GREAT CREATIONS OF THE OPERA OF MONTE-CARLO : “THE CHILD AND THE SPELLS”, BY MAURICE RAVEL

Created at the Opera of Monte-Carlo in 1925, “The Child and the Spell” is a lyric and fairy composition by Maurice Ravel, in collaboration with Colette. This work made a great impression to the public and critics. (full text in French)

This article deals with François-Joseph’s life and career. Born in 1768, he was a neoclassical artist, both sculptor, painter, drawer and engraver. He was given the scholarship by Augustin Pajou, worked for Dominique Vivant Denon and made bas-reliefs, marble portrait busts and allegories. In 1816, he became professor at the School of Fine Art of Paris. Awarded and knighted under the Restoration, he died in Paris in 1845. (full text in French)

" LES REFLEXIONS MORALES ET SENSEES ", BY DUKE OF VALENTINOIS, OR THE TOUGHTS OF A MODERN...

Jacques François Léonor de Goyon-Matignon, Duke of Valentinois and Peer of France because of his marriage with Louise-Hippolyte Grimaldi, has been prince of Monaco for a short time (1731-1733) and he was also well known as an art lover and man of letters. He was, among others, the author of “Réflexions morales et sensées”, published in Mercure de France in 1746 and 1747. This article publishes and analyses those thoughts, according to the original manuscript. (full text in French)

According to an analysis of the available demographic sources, the author describes the evolution of the population in Menton (formerly Puypin) and Roquebrune in the Middle Ages, in comparison with the castra of Nice. Furthermore, the author also studies the Provençal and Ligurian influences in this area. (full text in French)

THE RAIL-WAY IN THE PRINCIPALITY

On October 19th 1868, the railway between Nice and Monaco was officially opened to the traffic. This event opened up the Principality and put an end to more than ten years of dealings and slowed works because of geographic, political, technic and financial troubles. This extensive worksite permitted Monte-Carlo and the Principality to develop rapidly. (full text in French)

THE ROOTS OF THE LORDSHIP OF MONACO : CHARLES I D’ANJOU AND THE VENTIMIGLIA COUNTY

In the middle of the 13th century, Italy was torn by the conflict between the Pope and the Emperor. In order to consolidate his county line, Charles d’Anjou, successor of Raimond Bérenger V, count of Provence, dealt with the count of Ventimiglia, regardless of the Genoa hostility. (full text in French)

In this issue, the Annales monégasques deal with very different topics. That is to say, arts and letters, through the sculptor’s life named François-Joseph Bosio, “The Child and the Spells” by Ravel, and the philosophical reflections of Jacques de Goyon-Matignon, Duke of Valentinois. The important stages of the construction of Monaco are also discussed : Charles d’Anjou’s action in the 13th century, and the installation of the railtrack in Monaco in the 19th century. Finally, a study regarding the population of Menton and Roquebrune in the Middle Age, completes an article in the previous issue. (full texts in French)