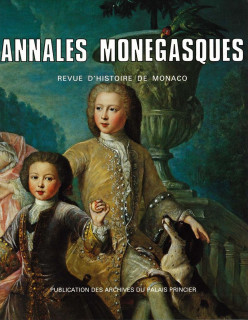 In may 1734, Honoré Grimaldi, renamed Honoré III, acceded to the throne of Monaco. He is the sixth prince of Monaco, but this was the first time that an accession had been celebrated with great fanfare. 13-year-old, Honoré III succeeded his father Jacques I, who died a couple of years after the death of Princess Louise-Hippolyte. This article describes the lavish ceremony of this accession, which lasted fifteen days. (full text in French)

THE RELIGIOUS COMMUNITIES IN MONACO UNDER THE REIGNS OF THE PRINCES CHARLES III AND...

From the second part of the 20th century and the settlement of the Monaco religious independence, many religious communities came to settle in Monaco. Benedictine, camaldules ermites, Carmelites, ladies of Saint-Maur, Dominicans, Franciscans, Jesuits and many other orders found shelter in Monaco. (full text in French)

A LITTLE KNOWN TREASURY FROM THE ARCHIVES OF THE PRINCELY PALACE OF MONACO : SOME...

The Archives of the Palace of Monaco, have kept, from the 18th century, a series of letters written by Montaigne to Marshal Matignon, in the late 16th century. This set of letters is the most significant one from Montaigne. This correspondence, dated from 1582 to 1585, highlights us about the role played by the philosopher during the landmarks of this period of time, particularly in Guyenne. (full text in French)

IN THE FOOTSTEPS OF A PRINCESS OF MONACO : CHARLOTTE-CATHERINE DE GRAMONT

Charlotte-Catherine de Gramont was the first French princess of Monaco. Born in 1638 or 1639, she married Louis I in 1660, with the support of Louis XIV, and gave birth to three children. The couple lived within the court of Louis XIV and Charlotte-Catherine became the superintendent of Henrietta of England. She attracted many coutiers as she was a great beauty, and had a relationship with the king for a few months. (full text in French)

THE LORDSHIP OF MONACO FROM THE SPANISH POINT OF VIEW, AT THE TIME OF CHARLES QUINT

This study deals with the correspondence between Francisco de Valenzuela, a Spanish diplomat in Monaco, and the imperial chancellery, between 1533 and 1534. This correspondence allows us to understand the relationships between Spain and Monaco, during an intensive period of diplomatic activities. (full text in French)

THE CAVES OF GRIMALDI

On the border between France and Italy, near Menton, the Mediterranean sea has created an escarpment of 100 meters high. This is where the caves of Grimaldi are situated, also called caves of Bazi Rossi. Tools, carved stone statuettes, human graves and engravings were discovered in the middle of the 19th century. This finding shows the presence of humans in the Paleolithic times. (full text in French)

Exhausted by the risks to navigation, Prince Albert I wanted to bring his experiences and knowledge to the protection of navigators and shipwrecks. He succeeded in creating the International Association for the Marine, and held his first congress in Monaco in April 1901. (full text in French)

Four articles illustrate the major stages of the Monaco modern history : First of all, the relationships between the Spanish and Monegasques, at the time of Charles Quint ; then, the life of Charlotte-Catherine de Gramont within the French court ; and finally, the sumptuous accession of Prince Honoré III which reflected the French model. A presentation of the correspondence between Montaigne and the Marshal Jacques II de Goyon de Matignon, allows us to discuss the Guyenne history in the 16th century. This issue also covers the law of the sea, the religious history and the human paleontology. (full texts in French)