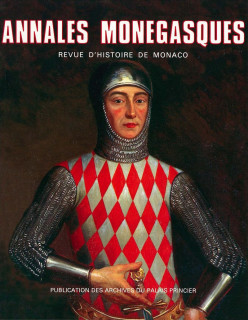 René Blum was the brother of the famous Léon Blum. This article talks about René Blum as an arts lover, whose name must be associated to Balanchine, Pagnol or Matisse. He was also co-creator of the Russian Ballets of Monte-Carlo and director of the theater and the Ballets of Monte-Carlo from 1924 to 1940. He died in the concentration camp of Auschwitz in 1942. (full text in French)

THE WAY OF PRINCE ANTOINE I

The acute gouty arthritis that was facing Prince Antoine I at the age of 46, forced him to live between Monaco and Menton. Thus, it was crucial to build a carriage road between those cities, which was much more reliable than sea journeys. It was integrated to the road network… 150 years later. (full text in French)

The Giornale, written by Don Pacchiero, parish priest of Monaco in the 17th century, may be considered as the equivalent of the priest Lanciarez’s works in the 18th century. Indeed, written between 1638 and 1656, this diary gives a lot of precisions regarding the political and everyday life in Monaco. This third and last part is dedicated to the themes tackled in the entire Giornale. (full text in French)

THE ORIGINS OF A 700 YEARS DYNASTY : ON JANUARY 8th 1297, THE GRIMALDIS SEIZED MONACO

In order to commemorate the Grimaldis’ arrival in Monaco, this article relates the events which took place in 1297, describing the European political and social background. It also succinctly highlights the history of the current princes’ ancestors. (full text in French)

A SOVEREIGN PRINCE’S POETRIES IN THE 18th CENTURY

Prince Antoine I is well known to be the “musician prince”. However, his sensitivity led him to write poems. This article presents a collection of those poems, never published before. It is also a good way to know more about the family circle of this artist and prince. (full text in French)

The map of 1602 was created in order to try to define, for the umpteenth time, Monaco’s borders with la Turbie, which was a village of the Savoy Kingdom. This map stands for the independence desire, which lasted until the middle of the 18th century. (full text in French)

This issue is rather modernism-oriented. The “Archives document” honours a map dated 1602, and an article is dedicated to the Giornale by the priest Pacchiero. The 18th century is represented by Antoine I and both sides of his work (the creation of a path and poetry). However, the contemporary times are discussed within two other studies : In one hand, René Blum, who was the director of the Opera of Monte-Carlo in the 19th and 20th centuries, and on the other hand, seven Monegasque poets from the 20th century. To finish with, an article covers the origin of the Grimaldi dynasty, nearly seven centuries-old. (full texts in French)