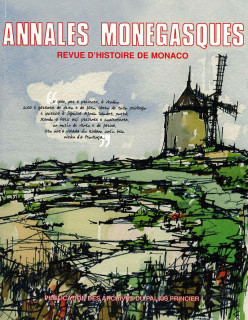 Nowadays, the Moulins area is composed of luxury boutiques, but its name refers to history. Relying on maps, plans and photographies, this article deals with this industrial area and population, where several mills were built (flour and oil mills), from the 13th century to the middle of the 20th century. (full text in French)

FEBRUARY 1338 : CHARLES GRIMALDI COMMITTED HIMSELF TO THE SERVICE OF THE FRENCH KING

Charles Grimaldi was Rainier’s son, admiral of France and victorious of Zierikzee. He was involved with his father by fighting alongside the French king, Philippe VI, until 1341. His victories permitted him to have subsidies, and he undertook some fortification works around the rock of Monaco. (full text in French)

ABOUT THE MONACO CASTLE’S FOUNDATIONS IN 1215. THE DOCUMENTARY SOURCES (FIRST PART).

This article refers to the original texts which deal with the foundations of the castle in Monaco. Besides, more recent documents and the results of historical researches allow us to have a better understanding about it. The second part of this study is published in the Annales monégasques n°31. (full text in French)

Guillaume Apollinaire spent several years in Monaco and was at Saint-Charles school. He wrote down his memories in a collection entitled “La vie anecdotique”, and depicted several contemporary characters, famous or unknown. Among them, Adrien Blandignère, an eccentric writer. This subject is a good opportunity to go back to the Carnieri area in Beausoleil, in the end of the 19th century, with pictures of that time. (full text in French)

In Monaco, the houses have a thing in common : they were built after 1861, when Prince Charles III decided to restructure his State, because of the assignment of Menton and Roquebrune. Several photographies illustrate this article. (full text in French)

Only a few letters published by Alphonse Daudet between 1866 and 1868, were translated par the Canon Georges Franzi, a Provence lover. The letters, read in the Monegasque speaking language, are also available in the three CD attached to the hard copy of this issue. (full text in French)

Two articles about the Middle Ages deal with the history of the Monaco castle construction in 1215 (in a first part), and an episode about Sir Charles Grimaldi’s life in the 14th century. Then, among the three studies of the 19th century, one is dedicated to the “Quartier des Moulins”, another one talks about Guillaume Apollinaire, and the last one refers to the Belle Epoque houses of Monte-Carlo. To finish with, an unusual occurrence ends this issue : the translation, in Monegasque speaking, of “Letters from my Windmill” written by Alphonse Daudet, including a CD. (full texts in French)