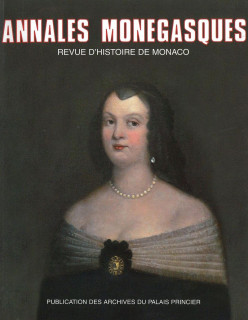 ARCHIVES DOCUMENTS : A MUSICAL CORRESPONDENCE IN THE 18th CENTURY

Prince Antoine I was well-known as being the “musician prince”. His passion for the music was so intense that he constituted an orchestra who played Italian or French scores every day. However, he only corresponded with French composers. This article is based on quotes from some letters between the prince and Destouches, Couperin, Pécourt and Rebel, in particular from 1722 to 1731. (full text in French)

PRINCELY PATRONAGE AND ASSERTION DURING THE AGE OF ENLIGHTENMENT...

This article deals with the patron role adopted by the princes of Monaco, relying on the example of the Monegasque painter named Jean-Baptiste Vignali. He was taught thanks to Honoré III’s generosity and had an enviable career in France and in Italy, ruined by the French Revolution hazards. (full text in French)

ARCHIVES DOCUMENTS : A PIECE OF EVIDENCE IN THE CASE "DE LA CASSETTE"...

At that time, much has been written about what happened in 1819, in Roquebrune village. According to Honoré V, this was an “absurd mystification” and a political affront, but it created an idolatry phenomenon within the population. (full text in French)

THE TRAVEL JOURNAL OF PRINCE ANTOINE OF MONACO, IN ITALY AND... SECOND PART

In this second part, the Duke of Valentinois mainly wrote down about Rome, and described several cities like Spoletto, Bologne, Modena, Parma, Plaisance, Pavia, Milan, Bergame, Mantoue, Ferrare, Malamocco, Venice, Padoue, Verceil and put an end to his trip in Turin, in Savoy at that time. The last part, published in the Annales monégasques n°34, deals with Swiss and German cities. (full text in French)

This volume publishes the second parts of Aurelia Spinola’s life and the Duke of Valentinois’ travel diary. Besides, two other articles are dedicated to art in the 18th century : a musical correspondence, and the wanderings of a Monegasque painter, called Jean-Baptiste Vignali. Lastly, a study recounts a quite funny episode which took place in Roquebrune in the 19th century. (full texts in French)