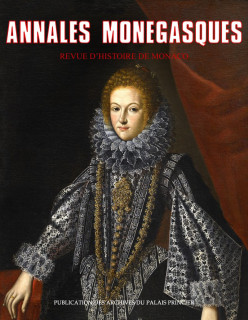 AN UNRELEASED PORTRAIT OF HIPPOLYTE TRIVULCE, THE FIRST PRINCESS OF MONACO, BY...

Fede Galizia was a painter from the 17th century. The Hippolyte Trivulce portrait she painted of Hippolyte Trivulce, Honoré II’s wife, is at the core of this article. Detailing the pigments used, the style, its composition and the character’s clothes, the author uses the results of recent scientific studies conducted about this paint. Moreover, she also gives details about the historical and pictorial context in order to have a better understanding. (full text in French)

NAVAL WARFARE, SPYING AND ART TRADE IN LIGURIA IN THE EARLY...

Several topics are discussed within the correspondance between the sovereign of Monaco and Giovanni Antonio Sauli, whose family belonged to the Genoa oligarchy. Especially as the new prince had to impose on the European plan. The presented letters come from the princely palace’s archives, and are dated from 1628 to 1639, when Monaco was under the Spanish protectorate. (full text in French)

In the early XVIIth century, the French policy towards Italy was essential because conquering peninsula lands was a good opportunity to harm Spain. In this regard, Richelieu understood the importance of Monaco, which was under the Spanish protectorate and at the gates of the Italian province. Furthermore, the new prince intended to shake off the shackles. The negociations concluded by the Treaty of Péronne in 1641, started from the 1630s. (full text in French)

THE GRIMALDIS AND THE MATIGNON LORDSHIP

On the occasion of Prince Albert II’s visit to three towns of the Matignon lands on the 5th and 6th july 2012, this article deals with the origins of the links between the Grimaldi family and the Matignons : the princess Louise-Hippolyte’s wedding with Jacques de Matignon in 1715. Then, the author describes the genesis of the prince’s Breton roots. (full text in French)

"MARE NOSTRUM ?" PRINCE ALBERT I AND THE MEDITERRANEAN

Although heir and sovereign of a Mediterranean coast state, Prince Albert I was not attracted by this geographic area. According to him, the latin population was not as dynamic as people from Northern Europe. Nevertheless, until 1882, he visited several bordering countries such as Spain, Italy and North Africa. Among his scientific campaigns, less than twenty percent were executed in the Mediterranean. The international cooperation created the international commission for the Mediterranean sea’s scientific explorations, in the very beginning of the 20th century. (full text in French)

THE 1887 EARTHQUAKE CONSEQUENCES IN THE PRINCIPALITY OF MONACO

Important scientific documents, diagrams and photographies permit the author to give more details about a devastating event. This study is even more important because we know, for sure, the earthquake damages caused in Monaco. (full text in French)

THE TENTH ANNIVERSARY OF THE MONEGASQUE EURO (2002-2012), FOUR CENTURIES AFTER... SECOND PART

This double anniversary is a great opportunity for the author to refer to the main money improvements under each reign. This is the second part of the article previously published in the Annales monégasques n° 36. (full text in French)

Passionate about dialect, the translator of this play by Jean Anouilh – who died in 2008 – wrote three articles in the Annales monégasques n° 20, 24 and 29. They are all dedicated to the Monegasque language and writers. (full text in French)

DOCUMENT OF THE YEAR, PICASSO IN THE PALACE OF MONACO (1925)

According to the visitor’s book, Picasso and Olga visited the princely Palace on April 14th 1925. The author makes a link between this visit and Picasso stay in Monaco, following Diaghilev’s invitation, in order to attend the first performance of the new Russian Ballets production. (full text in French)

This volume publishes the second part of the article about euro, but also a translation of a French work into Monegasque : Antigone, written by Jean Anouilh. Then, three articles deal with Honoré II (a portrait of Prince Honoré II’s wife, his correspondence with the Sauli family from Genoa, and the French policy initiated towards Italy). Two other articles deal with Albert I (his connection with the Mediterranean sea and the 1887 earthquake). Then, an article refers to the shared history of the Grimaldi and Matignon families, and the document of the year is dedicated to Picasso. (full texts in French)