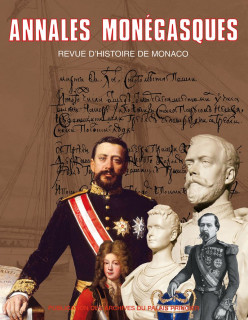 THE GRIMALDI AND THE BLACK SEA IN THE MIDDLE AGES

The paper enhances first the economic role of the Black Sea between the West and the Mongol khanates in the 13th and 14th centuries and then describes what were the political functions and the economic activities of the members of the Grimaldi clan in the Genoese colonies of the Black Sea. (full text in French)

The Grimaldi Family adopted the title of Prince of Monaco in 1612. The Romanov Family ascended the throne of Russia in 1613. In 1663, Russian Ambassadors discovered Monaco and its monarch. But the dynamic relations between the Russia sovereigns and the Monaco sovereigns really began during the 19th century, by the will of H.S.H. Prince Honoré V to forge links with Russia, which had an increased power after the Napoleonic wars.

Thanks to a courteous correspondence cadenced by the Family events and by the decorations exchanges, the links were accentuated until, at the end of the 19th century, the imperial Family, attracted by the mildness of the Mediterranean climate in winter, discovered the French Riviera and Monte-Carlo.

Consular relations were officially established in 1877 between both States. H.S.H. Prince Albert I was received for the first time in 1884 by Alexandre III. In 1896, for Czar Nicolas II's coronation, Louis, Prince Hereditary of Monaco, leads the Monegasque delegation to Moscow. On the eve of the First World War, Nicolas II authorized H.S.H. Prince Albert I to hunt the bison in his imperial domain of Biéloviège in Russian Poland. H.S.H. Prince of Monaco also built with Russia scholar, scientific and personal relations. He met Admiral Makaroff in Advent Bay, in Spitzberg Island in 1899 and was admitted in various Russian scholar until 1917. (full text in French

Alexandre Dumas published in 1854 Catherine-Charlotte de Gramont's (1639-1678) so-called "memoirs", under the title Vie et aventures de la Princesse de Monaco (Princess of Monaco's life and adventures). Written by Countess Dash, a friend of Alexandre Dumas, three "memoirs" actually are romanced biography of Marshal of Gramont's daughter, Princess of Monaco, Louis I's wife. The Duchess of Valentinois' life was adventurous, and shared between the intrigues of Louis XIV court, her love for the Duke of Lauzun and her stays in Monaco. She died when she was 39 yeasr old following a painful disease. Countess Dash présents in his way the historical reality in order to accentuate the romantic aspect of the heroine's life, even if it means making some nose-thumbing to the history. (full text in French)

REFLECTIONS OF THE PRINICIPALITY. MONACO'S PAVILIONS AT THE WORLD FAIRS 1873-1913

In the middle of the 19th century Great Britain and France organised the first World Fairs of modern times. Prince Charles III and Francois Blanc decided by common consent to take part in this "concert of nations" in 1873. Henceforth Monaco participated in the majority of these events across Europe. Looking at these pavilions and what was exhibited there allow us to establish the growth of the Principlity not only in terms of the economy, but also culture, the arts ans sciences. It highlights the two tendencies revealed by the increasingly close study devoted to these international gatherings : the march towards the modern world and the affirmation of national identity. (full text in French)

"PRINCE OF SCIENCE AND ART, HELPFUL PRINCE". ALBERT I OF MONACO AND MASSENET

Massenet forged privileged links with Albert I of Monaco, from 1902 until his death in 1912. Staying repeatedly in the Principality, which he assimilates to a heaven of peace compared to Paris, the French composer actively participates to the cultural Monegasque life by creating several of its operas or by participating in various artistic or commemorative events. (full text in French)

AN INTERRUPTED FRIENDSHIP. MARCEL PROUST AND PIERRE OF MONACO

We knew that there was a friendship ended with a sudden rupture between Marcel Proust and Prince Pierre. If the friendship cannot be explained, the quarrel is understandable. The witnesses, then the biographers, proposed explanations often inspired by the writer's reputation, his complex psychology and a certain taste for the sensational. This article proposes an analysis of the four letters and telegram that Marcel Proust addressed to Prince Pierreduring the summer 1920. We follow the meanders, always to be explored, of the "proustienne" friendship, we also detect the rich and sensitive personality of Prince Pierre. (full text in French)

FROM A KING TO ANOTHER. THE WEDDING CONTRACT OF LOUISE HIPPOLYTE, PRINCESS OF...

On September 1, 1715, the Sun King died. Just a little more than a month before, he formally approved the conditions of the marriage of the heir to the Principality with Jacques de Matignon. Because of the last illness of the monarch, the contract is only signed on September 5, by the new King Louis XV, and by the Regency courtiers. According to the rules of succession of the Grimaldis, the husband must leave his family name and his coat of arms, but receives, as compensation, a title of duke and peer of France. (full text in French)

On the occasion of the Russian year, and in order to make a link with the Russian exhibition which took place in the Palace of Monaco during summer 2015, a large part of this issue is dedicated to the relationships between the Grimaldi dynasty and Russia, and more precisely the Romanov family. Then, a study about the commercial relationships between the Principality in the Black sea and the Crimea in the Middle Ages, completes this issue. Two other articles deal with the correspondence of Prince Albert I with Massenet, and the history of Monaco pavilion at the universal exhibition. After that, two parts pay tribute to Princess Catherine-Charlotte de Gramont and Prince Pierre, and the document of the year refers to the wedding of Louise-Hippolyte in 1715. (full texts in French)