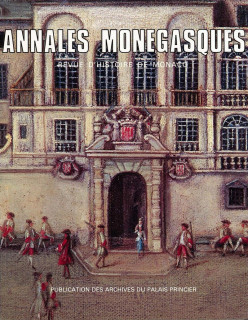 Born around 1580-1585 in an old and important family from Menton and Roquebrune, Dominique Pacchiero became, in the 17th century, an important character from the Monaco history. Early attracted by the priesthood, he was nominated, in 1615, priest of the Saint Nicholas parish, by the bishop of Nice and the Lord and Prince of Monaco, Honoré II. Man of the cloth, historian, chronicler and future Prince’s privy councillor, Don Parecchiero was a smart diplomat and man of influence in Monaco. (full text in French)

ARCHIVAL DOCUMENTS : THE MEETING BETWEEN HONORÉ V AND NAPOLEON ON HIS RETURN FROM...

On his return from the island of Elba in 1815, near Cannes, the Emperor Napoleon met Prince Honoré V, who came to repossess his State. This episode was the source of a witticism, probably inspired by a cronicler of that time, then taken up in history books and even by Alexandre Dumas. However, this is a picturesque view further from the truth. (full text in French)

THE ORIGINS OF THE LYRIC THEATER IN MONTE-CARLO. FROM THE GAMING HOUSES TO SALLE GARNIER

In parallel with the creation of Monte-Carlo, the second part of the 19th century saw the develpment of artistic activities, which were aimed at entertaining the wealthy European visitors customers who came to Monaco to spend the winter. In 1866, a small theatre was built and the first theatre seasons started in Monte-Carlo. This lyric life was marked by the creation of the Salle Garnier at the end of the 1870s. (full text in French)

Born into a French family originally from Picardie who settled in Monaco in the 17th century, Honoré Langlé showed an aptitude for music from a young age. At the age of 15, he went to Naples to learn composition. After having managed the Genoa theater, he went to France in 1768, where he became increasingly involved in the artistic life in Paris, before reaching an honourable rank in the contemporary French school. (full text in French)

After dealing with the importance and the use of dialectology, the author analyses the " Monaco speaking language ", its origins, its geographical area and specificities. He reviews the similarities and the differences bewteen the Monegasque and the genoa speeches, but also the provençal influence. (full text in French)

In the tradition, Devota, Devote, a young christian girl born in Corsica, was allegedly tortured during the Diocletian and Maximian Empire, in 303 or 304. Her body, kidnapped by the Christians, would have been carried in a small craft to Monaco, and entombed in a valley near a church dedicated to Saint Georges. The facts are reported in a document entitled Passio Devotae, or Saint Devote's Passion, the only biographical source of this figure. (full text in French)

LA CONDAMINE OF MONACO IN THE MIDDLE AGES

Located at the foot of the roch, in the cove of the port of Monaco, La Condamine could be considered as an historic suburb, as opposed to an old village huddled in a defensive relief, which was the case of many european cities, in medieval times. Far from it : this lowland sloping down to the coastline, urbanized late. Jean-Baptiste Robert studies the origins of the name « Condamine », the reasons behind the absence of urbanization, and talks about its possible cultivations in the Middle Ages. (full text in French)

At the beginning of the 19th century, willing to develop its principality, Honoré V tried to promote the growth of small industries in Monaco. Among other measures, he decided to open a Mint in order to strike Monegasque coins. The factory activity started in 1837 but it was not a success. In 1838, the activity stopped and the workers were fired, because of a ban of Monaco’s currencies in France and Piedmont. (full text in French)

The walls of the current Prince’s Palace were built in 1215, with the aim of defending the town, a Genoese colony of citizens who came from the metropolis. This town became a garrison, initially accommodating soldiers. The article covers the evolution of the garrison from the 13th to the beginning of the 17th century. (full text in French)

"We had a duty to give the opportunity, to local and international researchers who leant over the history of Monaco with selflessness, to see the result of their studious and patient work. Thus, by encouraging the achievement of this new review, H.S.H. the Sovereign Prince, shows his interest in history and his gratefulness to people who are at the service of the reputation of Monaco". This was the objective of Franck Biancheri, the palace’s archives curator and founder of the review. He is also the author of the preface of this first eclectic issue, dealing with numismatics, linguistics, military, religious and musical history. (full texts in French)