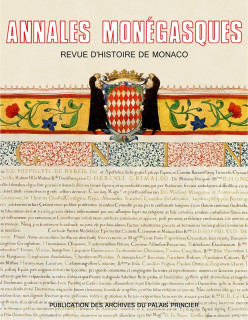 A PRINCELY CHÂTEAU IN NORMANDY. TORIGNI, FROM ROBERT OF GLOUCESTER TO THE GRIMALDIS

Now largely destroyed, the château of Torigni used to be one of the greatest and noblest houses in Normandy, and was in the 18th century one of the principal residences of the princes of Monaco. Numerous archival documents, mainly preserved in the Palace Archives, allow to trace its history: at first a fortified castle built for an illegitimate son of King Henry Beauclerc of England, it was reconstructed in the mid-14th century before becoming in the 16th century a much more sumptuous house. Jacques II de Matignon built a large château whose fronts, designed by a member of the Du Cerceau family, were covered with stone bosses. His descendants had this great building improved by new interior decorations, the most important being the cycle of paintings ordered in 1651 from Claude Vignon. A large park was created near the château, and a great cascade was built in the early 18th century. However, these landscaping were destroyed after the French Revolution, which lead to the loss of the majority of this great princely residence.

IN UTROQUE JURE. THE DIPLOMA OF DOCTORATE OBTAINED BY HERCULE GRIMALDI IN 1584 AT...

The diploma of doctorate in canon and civil law, obtained by Hercule Grimaldi in 1584 at the University of Pavia, is translated here from latin and commented. In addition to its outstanding aesthetic and technical quality, this charter contains a lot of informations about the doctorate in law in the 16th century, its requirements and procedures, at that special time of Europe’s history, during the Counter-Reformation. Moreover, the doctorate obtained by Hercule demonstrates real Grimaldi’s interest in University, which can play an important role not only in instructing monarchs, but also in promoting the symbolic image of the dynasty, by honouring its remarkable figures.

RUBENS IN THE PRINCES OF MONACO COLLECTIONS (17TH-18TH CENTURIES)

The great charm of Peter Paul Rubens, the painter of the Seventeenth-century European courts, could not be grabbed by the Grimaldi House: Honoré II inventories include some paintings attributed to him, while Antoine I requested the Monegasque painter Jean-Augustin Vento for some copies of his celebrated Maria de Medici Cycle. Anyway his most passionate admirer was Jacques I: among the paintings attributed to the Flemish master in his possession, we can find the so-called Le fils de Paul Rubens, a beautiful portrait so far preserved. The painting, currently at the Städel Museum in Frankfurt, is now attributed to Cornelis de Vos, a great Flemish portraitist and also Rubens collaborator. It is identified as the portrait of his daughter Susanna. (full text in French)

THE LION AND THE DOVE. VENICE AND MONACO AT THE XVII AND XVIII CENTURIES

At first sight, Principality and Serenissima were, in the seventeenth and eighteenth centuries, two independent States that geography, history, politic, and economic separated more than they gathered. Even so, Antoine I’s « Grand Tour » is a problem; how can we explain his long presence in the city of the Doges (nearly one month), unlike he stayed only a few days in the other towns he crossed? Perhaps because his father, Louis I, had ties that were transcribed in many ways. Which ones and how? Did his successors continue them? Quite always, everything has to do with this prince.

ANCESTRY AND MONEGASQUE YOUTH IN MONACO. AN INQUISITIVE MAN AT THE XIX CENTURY...

Not surprisingly, Hercule Florence’s personality owes its debt to his childhood and parenthood. He wrote some pages about this time in Nice and Monaco, which are here published, introduced by our own researches helping to know better these 1793-1823 years around the young inventor and his parents. We tried here to enhance the documents existing in the Archives of Monaco, of Nice and the Alpes-Maritimes, sometimes supporting, sometimes correcting Hercule Florence’s memories. (full text in French)

In 1817, the plenipotentiaries of the prince of Monaco and of the king of Sardinia signed in Turin the two treaties which established and regulated the protectorate of Sardinia on the principality of Monaco which lasted until 1860 when the ancient Savoy county of Nice and the villes libres of Menton and Roquebrune were annexed to France. The treaties were ratified by king Victor Emmanuel I of Sardinia on 8 and 11 november 1817 in the royal hunting castle of Stupinigi, close to Turin. Today, almost two centuries after the treaties of Stupinigi, we want to commemorate the most significant events that marked this period so interesting from a historical and diplomatic profile. This essay examines in detail some aspects of the Franco-Sardinian-Monegasque diplomatic and territorial controversy under the Stupinigi treaties. (full text in French)

The award-winning writer and philosophy teacher, Armand Lunel (1892-1977) received the Théophraste-Renaudot first prize in 1926 and marked several generations of pupils through his teaching from 1920 to 1953 at the High School in Monaco (Lycée de Monaco). Throughout his life he constantly declared his unceasing esteem for the Prince and his family as well as for the inhabitants of a country that he loved as much as the figures from his own Provençal childhood. Although his works reveal little of his deep attachment to Monaco, his commitment to the activities of various associations and institutions in his capacity as a prominent literary figure made him a true cultural ambassador for Monaco in France and in the world. Finally, the course of Lunel’s life and career is significantly representative of the hardships faced by a Jewish civil servant during World War II, dismissed by Vichy, protected by the Princely family and reinstated at the Liberation by the Monegasque government. (full text in French)

In early 1892, the state took over the distribution of matches in Monaco. After half a century of French boxes surcharged « monaco », the first illustrated boxes and books appeared around 1950. Their initial “woodcut” style was later replaced by beautiful photographic illustrations on sold boxes and by advertisements, especially for cigarettes and other products of the Régie monégasque, mainly on boxes for free distribution. From a technical point of view, the wooden boxes disappear to the benefit of cardboard boxes, and the books simply glued took the place of the old tacked ones. (full text in French)

The Monegasque commemoration of this year have strongly influenced the topics of this issue. Indeed, two hundred years ago, in 1817, the Stupinigi agreements linked Monaco to the kingdom of Piedmont-Sardinia. From the 1848 secession to the official end of the Sardinian protectorate of the Principality in 1860, many vicissitudes have been heard. In 1917, a century ago, the battle of the “Chemin des Dames” gave the opportunity to the future Louis II to shine, as he was a volunteer within the French army. A notebook transposes the exhibition dedicated to the prince’s route during the Great War and has been shown to HSH the Prince Albert II in spring of 2017. Armand Lunel died fourty years ago, in 1977. Philosopher and writer less recognized today than he was previously, he taught over a lifetime in Monaco and was granted the Théophraste-Renaudot prize.

Further to the great exhibition of this year in the Nouveau Musée national de Monaco about Hercule Florence, curious inventor of the 19th century, the first pages of his autobiography dedicated to his youth spent in Monaco have been published, annotated and commented. As part of the curriculum on the ancient princes’ art collections, a point about Rubens is made in this issue. An iconic and illuminated document from the Archives of the Palace is here highlighted : Hercule I’s doctorate diploma in canon and civil law, dated 1584. The former dynasty fiefs are presented through an architectural monograph of the castle of Torigni located in Normandy and which was one of the Princes’s residence in the 18th century. The modern historical period is also mentioned thanks to various relationships maintained by Monaco and Venice in the 17th and 18th centuries. To finish with, in order to satisfy the collectors, a study is dedicated to a topic which may look anecdotal : the Monegasque matchboxes from the 19th to nowadays, the evolution of which reflects another image of the Principality.