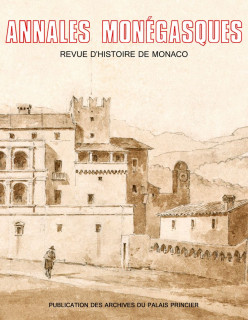 POWER AND MEN OF WAR AT THE END OF THE MIDDLE AGES. CHARLES GRIMALDI'S SERVICE TO...

Up through the first half of the 14th century, the kings and princes of the territories continued to rely primarily on military service, turning to the chivalry in particular, in order to wage their war as successfully as possible. However, at the end of the Middle Ages, recruiting soldiers in this manner increasingly meant providing pecuniary consideration, wages and in-kind compensation. Such was the case of Charles Grimaldi, who served the French monarchy and the Anjou dynasty over many long years. His enlistment enabled him to build political fame and financial power. (full text in French)

SPLENDOR AND GREATNESS OF THE PRINCE. THE FUNERAL OF HONORE II OF MONACO, AS...

Honoré II (1597-1662), the first of the Grimaldis to bear the title "Prince of Monaco", instituted a true monarchy. He modeled his system largely after that of the French royalty and forged an alliance with France in 1641 in order to leave the Spanish protectorate. The chaplain Don Francesco Bottino provided a detailed printed account of the prince's royal funeral, which he himself organized and presided over.

The chaplain pronounced the funeral oration on November 4, 1662, the same day as the majestic, solemn funeral ceremony, ten months after the prince's January 10th passing and the presentation of the prince's mortal remains at the palace and the burial ceremony, which took place on January 12th in the St. Sebastian chapel of St. Nicholas Church.

The November funeral ceremony, which followed in the grand Baroque tradition, which one was modeled on the magnificent Italian funeral services, satisfied two aims : the glorification of the actions, virtues ans Christian faith of the deceased and above all, the enthronement of Louis, his successor. The funeral as performance served to coronate the heir. In order to illustrate the princely genealogy, it was essential that the decoration process, featuring numerous statues, sayings, allegories and ephemeral sculptures, be sumptuous. The facade, naves and choir were completely covered with drapery and epitaphs as means of illustrating the origins and power of this monarchy by divine right. The cenotaph, placed on top the catafalque, paid spectacular homage to the deceased by raising him up to God and reminding everyone of the dynasty's glory. (full text in French)

REMBRANDT'S PAINTINGS IN THE COLLECTION OF JACQUES I OF MONACO, DUKE OF VALENTINOIS

Jacques-François-Leonor de Matignon (1689-1751), who took the throne as Jacques I, "pièce rapportée dans la dynastie Grimaldi", created a great picture Gallery ; he also moved part of the Monegasque collections to his house of Passy and Torigni, particularly though to his magnificent Parisian mansion, the Hotel de Matignon. He overcame the Italianate taste of his predecessors, showing to be deeply broadminded towards Europe and really passionate for Rembrandt Harmensz van Rijn, prince of the Dutch painters of the Golden age. About twenty Rembrandt's paintings were found in inventories and records of the Archives, either originals or copies. The purpose of this article is to introduce the splendid Self-portrait, the charming Portrait of a man holding gloves, in the Metropolitan Museum of New York, the Portrait of a man in a board brimmed hat, in the Japanese Kawamura Mémorial Museum of Art, the mysterious Jewess (Christie's London) and the Admiral Cornelis Tromp from the Louvre Museum. (full text in French)

PALACE OF MONACO'S VANISHED LIBRARY FROM RENAISSANCE TO RESTORATION

The archives, and more specifically the post mortem inventories, teach us that the ancient palace of Monaco's library has existed since at least the Renaissance and was continuously enriched through all major periods of history before completely disappearing under the influence of revolutionary confiscations. The review of its collections allow us to better understand its relations with the lords and the princes of Monaco, as well as their entourage. It also confirms their importance, quantitatively and in quality, which has made of the palace of Monaco's library at least equal of its homologues, notably the French ones. (full text in French)

THE MENTON "SPRINGTIME OF THE PEOPLES" THROUGH L'ECHO DES ALPES MARITIMES...

Under the cloak of the Italian "springtime of the peoples", Menton, principal city of the principality of Monaco, rebelled against the prince. The rebels demanded that the same reforms as those by Charles-Albert I in the kingdom of Sardinia surrounding the Monegasque territory. Nevertheless, noticing the hesitations of Florestan I to realize a new government, which would allow Menton to have the same political role as in the demographic and economic area, the rebels decided to secede. The process is considered unfounded by the prince and his partisans, the political conflict carries on through the newspapers in the neigbouring province, the Echo des Alpes Maritimes founded in January 1848 by about ten Niçois liberals guided by Auguste Carlone, a famous banker from Nice. The study concentrates on the way neo-publicist manage to implement a new public debate on the future of the principality if Monaco, led by some Mentonnais and Monegasque debating in the columns of the papers without having even seen or knowing each other, which enabled the writers to cleverly take position for the secessionist. (full text in French)

A SPIRITUAL FRIENDSHIP. PIERRE LOTI AND ALICE, PRINCESS OF MONACO

The name of Pierre Loti is too exclusively associated with the literary exoticism. He has been caricaturated as a perpetual nomad and it was also believed that his feminine ideal came down to his sensual heroins. Among all the attractive, cultured and well born ladies Pierre Loti met along his life, there was the Duchess Alice de Richelieu, who became Princess of Monaco (1857-1925). From 1884 to the French academician's death in 1923, Princess Alice and Pierre Loti had a very strong relationship, though not very well known. "Soul mates, we are", said Loti in 1894. To what she answered : "You are a kind of worship for me"... (full text in French)

An unlikely and inexcusable confusion led, a few decades ago, to the "amalgamation" of two virtually homonymous French artists who both had some links with the Principality of Monaco. Paul Emile Berton (born in Chartrettes in 1846, died in Paris in 1909), each year from 1894 to 1903, showed landscapes at the International Exhibition of Fine Arts in Monte-Carlo. Paul Louis Joseph Berthon (born in Villefranche-sur-Saône in 1872, died in Sceaux in 1934) designed two bookshop posters for Prince Albert I's book, La Carrière d'un navigateur. At Princess Alice's request he produced several illustrations for the programmes of operas performed in 1900 at the Monte-Carlo Theatre. (full text in French)

Behind the universally well-known name of Monte-Carlo, which keeps the memory of Charles III alive, builder Prince and founder of the modern Principality, there is a history. Fatherhood is plural, shared between François Blanc, the "wizard" of Monaco, the main shareholder of the Société des bains de mer, the Prince, and his General Governor Edward Imberty. It was then to forget a local place name, whose etymology could involve attacks against the casino. (full text in French)

This issue is mainly dedicated to culture. During the modern era, some princes of Monaco proved to be paints and books collectors. Some of the Rembrandt works are studied through Jacques I’s collection, and the library, which was scattered during the French Revolution, is now “brought back to life”. The epistolary relationship between Princess Alice and the writer Pierre Loti, is highlighted. The cultural aspect, in the sociological meaning of the term, is dealt with a study about Prince Honoré II’s funerals. Furthermore, an article describes the war, waged by Charles Grimaldi, in support of Anjou in the late Middle Ages, while another article refers to the disagreements in the press, during the separation of Menton and Roquebrune in the middle of the 19th century. To finish with, the document of the year is dedicated to the 150th anniversary of the creation of Monte-Carlo. (full texts in French)